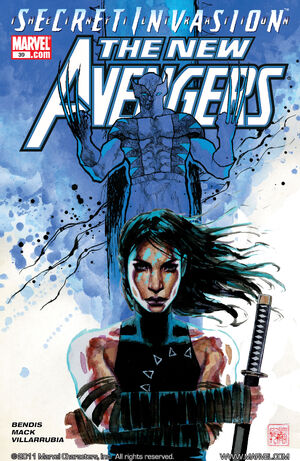 Why did you send Captain America to me?

We begin with Echo telling Wolverine that she doesn’t believe in this whole Skrull conspiracy theory. Echo thinks that the Secret Avengers may just be making up this entire Skrull conspiracy just to make themselves feel better so they won’t think about what disasters their lives have become. Wolverine disagrees and says that something big is about to happen.

Wolverine then confesses that the main reason that he remained up with the New Avengers was because he wasn’t going to let them leave Echo in Japan. Echo tells Wolverine to not hit on her again. Wolverine says that he isn’t hitting on her. That she will hit on him.

We cut to Echo out jumping from rooftop to rooftop and meeting up with Daredevil. Echo tells Daredevil that she just wanted to see him and wanted to know why he sent Captain America for her. Daredevil acts confused as to what Echo is talking about. Echo then asks Daredevil who he is really.

Suddenly, Daredevil turns into Echo and then attacks Echo. The Skrull-Echo displays all the powers of the X-Men. The Skrull tells Echo to surrender so that it can take her place on the Secret Avengers. Suddenly, Wolverine appears on the scene and attacks the Skrull.

Wolverine and Echo have a pretty nasty brawl with the Skrull and finally are able to hurt it bad enough where it decides to retreat and live to fight another day. After the Skrull runs away, Echo tells Wolverine that she know believes him that there is a Skrull conspiracy. Wolverine says “I told you so.” Echo asks Wolverine why he followed her. Wolverine responds that he figured she was the most likely person that the Skrulls would try to replace in order to infiltrate the Secret Avengers because Echo has the least amount of ties and the least history.

We zip forward to "Avengers Apartment". Hawkeye and Echo are hanging out drinking coffee. Hawkeye tells Echo that she knows how she feels. That when he first joined the Avengers that he didn’t know if he belonged. He felt useless next to members like Thor. But, one day, you get your shot and you are the right person at the right time and all of a sudden you are an Avenger.

Echo interrupts saying that they need to be honest. That this is not the Avengers. (Well, I’d certainly agree with that statement.) Hawkeye counters that that is exactly what everyone said when he joined the Avengers. The press bashed them. And then one day those days became the glory days. That it never feels like it at the time, but at some point today becomes yesterday and yesterday becomes the glory days. Hawkeye says that he will certainly look back on this conversation fondly.

Hawkeye then apologizes for the other day. Echo says if Hawkeye means when she walked in on him in the shower. Hawkeye says no, he meant after the fight with the Hood when he patched Echo’s arm. Hawkeye said that he wanted to kiss her. Echo says that she knows. Hawkeye asks if she would have minded. Echo says “No.”

Hawkeye then asks why Echo didn’t kiss him. Echo replies that she wasn’t going to if Hawkeye was going to chicken out. Hawkeye then leans in and plants a big wet juicy kiss on Echo probably with some tongue flickering as well.

We cut to Echo waking up in bed. Hawkeye is asleep next to her. Echo covers her eyes and everything goes to black.

Retrieved from "https://heykidscomics.fandom.com/wiki/New_Avengers_Vol_1_39?oldid=1447958"
Community content is available under CC-BY-SA unless otherwise noted.