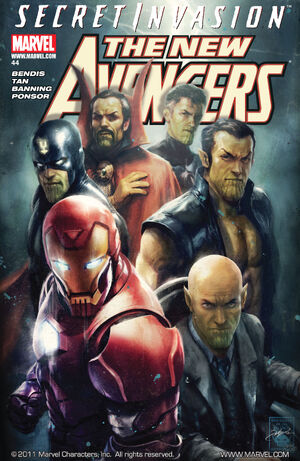 He truly loves us. The Empire will live.

Tony Stark calls together high profile leaders of the super hero leaders to discuss their recent abduction at the hands of the Skrulls. Professor X says he believes the Skrulls have found a way to walk among them undetected. After Dr. Strange fails to conjure the Eye of Agamotto, he starts to think that they may still be on the Skrull ship. As the Black Bolt prepares to escape, Professor X announces that the experiment has been terminated. He transforms into a Skrull and kills all the clones in the room.

Dro'ge explains the experiment to Emperor Dorrek VII, saying they are trying to extract the information of how a Skrull could go undetected from these clones of Reed Richards. The next test takes the form of a Skrull interrogation scene. The Skrulls bring in "Sue Richards", who pleads with Reed to tell them what they want. When Reed refuses, they kill "Susan" and bring forward "Franklin". The interrogator asks Reed how a Skrull could go undetected on Earth, and Reed appears to give in, saying he will tell them anything. Fry'lu says Reed is lying, and Galan ends the experiment.

For the next experiment, Fry'lu suggests taking a more subtle route. While Reed Richards lays in bed and ponders his work, "Franklin" enters and says he can not sleep because of "aliens". He says he has heard Uncle Johnny and Uncle Ben talking about the Skrulls. Reed reassures him that the Skrulls could not be living among them because he is smarter than they are. As Franklin nods off to sleep, Reed stays awake and scribbles down some math equations. The next morning, Dro'ge orders his backup to kill the Reed Richards clone. He picks up the paper and calls the experiment as a success.

Retrieved from "https://heykidscomics.fandom.com/wiki/New_Avengers_Vol_1_44?oldid=1447963"
Community content is available under CC-BY-SA unless otherwise noted.