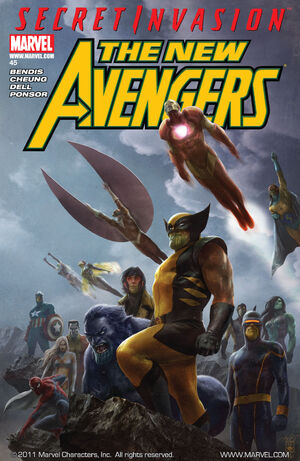 SECRET INVASION TIE-IN If the Skrulls have infiltrated us for years preparing for the INVASION, then what happened to them during the legendary HOUSE OF M event? Find out here in another huge chapter in the Secret Invasion story packed with shocking reveals. By Secret Invasion's Brian Michael Bendis and superstar artist Jim Cheung (Young Avengers)

Retrieved from "https://heykidscomics.fandom.com/wiki/New_Avengers_Vol_1_45?oldid=1768724"
Community content is available under CC-BY-SA unless otherwise noted.