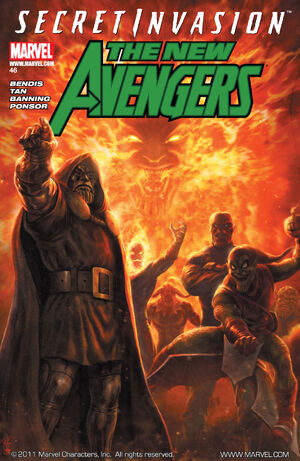 One month ago, Hood and his gang of criminals interrogate a S.H.I.E.L.D. agent, asking him to tell them everything he knows about Skrulls.

A day before these events, a group of S.H.I.E.L.D. agents bring Madame Masque in for an interrogation. Madame Masque resists capture at first, but the agents subdue her. However, she refuses to talk and glares at them. When the agents attempt to take off her mask, Hood appears and guns down most of the agents. As Hood prepares to kill the last agent, Madame Masque stops him so that he can see that the other agents were actually Skrulls.

Hood's Gang gathers to interrogate the last S.H.I.E.L.D. agent. Madame Masque fires at the man's legs and feet until he cracks and reverts to Skrull form. Masque asks the Skrull why his agents were trying to replace her with a Skrull, to which he replies that the Skrulls need agents from all over the world to claim it as their own. Masque delivers the final blow to the undercover Skrull. As the group begins to argue about who could be a Skrull or who could not, Hood uses his powers to discover that Slug is also a Skrull.

With all the bodies in the warehouse, Hood instructs his team to burn it. Parker Robbins departs from his team and asks the demon-reflection to reveal the powers of his Hood or else he will throw it away. The demon reveals himself to be Dormammu.

Retrieved from "https://heykidscomics.fandom.com/wiki/New_Avengers_Vol_1_46?oldid=1529979"
Community content is available under CC-BY-SA unless otherwise noted.