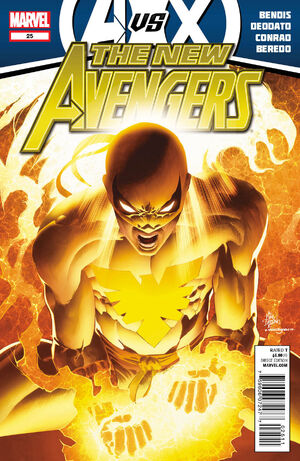 Keep reading but, read quickly, Lei Kung. You need to know everything. You need to tell the Iron Fist what he has to do. And if you fail, the Earth will fall. And if the Earth falls, we cease to be.

Centuries ago, Yu-Ti, the August Personage in Jade and master of the mystical city of K'un Lun, had recurring dreams of a bird of fire and a red-haired young woman who would possess and subdue it. The sacred pool of Bo-Ling revealed to him that the bird of fire was the Phoenix Force, soaring through the cosmos en route to Earth. Lei Kung the Thunderer had no red-haired women among his trainees, nor could he recall seeing one in the city.

Yu-Ti's recurring dreams became clearer, and in one particularly vivid moment he witnessed the girl (now wearing the mark of Shou Lao, which showed her to be the Iron Fist) releasing a Dragon spirit which merged with the Phoenix, giving her control over both forces. Driven to action, Yu-Ti went into the city. There he found a red-haired young woman, the product of her mother's dalliance with an outsider. The girl would not speak to him. Her name, Fongji, translated to "Firebird."

Yu-Ti took the girl away from her family and told Lei Kung to train her as the next Iron Fist.

In the present day, Yu-Ti has surprised the new Thunderer with this account of a previously-unknown Iron Fist. He says that they must prepare Daniel Rand, the current Iron Fist, for the responsibility he is about to take on.

• Iron Fist Discovers The Shocking Connection Between Himself And The Cosmic Phoenix Force…!

Retrieved from "https://heykidscomics.fandom.com/wiki/New_Avengers_Vol_2_25?oldid=1533406"
Community content is available under CC-BY-SA unless otherwise noted.