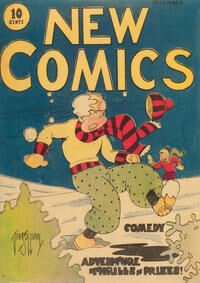 Uncle Chris finds a "lucky" horseshoe, but it doesn't work quite the way he thinks.

Sir Loin attempts to come to the aid of Cowhide, who has just been thrown out of the same tavern for the sixth time.

Billy lets Pudge ride in his new soapbox car, but neglects to provide him with one crucial piece of information.

King Harald woos Sigrid, daughter of Hagbard. Eventually, however, he sails away, leaving her with child. Hagbard orders the newborn infant boy abandoned in the wild. However, Kol the Wise hears wolves howling, and, investigating, finds them held at bay by a bright three-pointed light--the symbol of Odin. He drives the pack off and discovers the infant, and, looking up, he sees two ravens--Odin's totem creatures.

Blimp learns the hazards of bragging when a careless remark gains steam, and ends up forcing him to ride from New York to San Diego on a bicycle.

Blimp stops in Pottsville, Pennsylvania, where a misunderstanding in a local restaurant lands him in jail.

Hooty and Flea Tinker arrive at Penn Point, determined to excel at their new military school. However, several of the upperclassmen pull a prank on the twins that lands them in hot water.

Having earned his diploma-by-mail in inventing, Needles sets to work--with mixed results.

In a high-stakes poker game, Jim Gale accepts a set of pearls as a stake. Gale wins the game, but the other man attacks him. Facing two-to-one odds, Gale receives help from an unexpected quarter: Kim, a Chinese man with a talent for knife-throwing.

One day after his life is saved by the mysterious Kim, Jim Gale reads a classified ad offering a reward for the return of a lost pearl necklace. With the necklace in his possession, Gale goes to the address listed--only to encounter Kim. Gale returns the pearls to the mistress of the house, but refuses the reward. Instead, he offers to place the reward money as a stake at roulette, picking the house address, 17-20, as his numbers. Late that night, however, a masked man enters 17-20 while the Lady in Black is asleep.

Synopsis for "A Voyage To Lilliput"Edit

Freddie attempts to help a lady on the train and an portly gentlemen in the street, but his results fail to match his intentions.

Synopsis for "Bunko the Bear"Edit

Synopsis for "Sons of the Red Cormorant: Part 1"Edit

Grounded and disgraced pilot Wing Walker is kidnapped by the Sons of the Red Cormorant, who ruined his legitimate career so that he would be forced to work for them. Held at gunpoint, Wing has no choice but to fly the Sons on their journey. However, no sooner are they in the air than they are attacked by the Nipper. With his engines shattered by the Nipper's machine guns, Wing fakes a crash landing to escape, scattering a tribe of Indians at the crash site. As the Sons of the Red Cormorant prepare to ambush the Nipper, Wing encounters a young woman, a prisoner of the Indians.

Appearing in "The North Pole From the Bottom Up"Edit

Synopsis for "The North Pole From the Bottom Up"Edit

Captain Spinniker leads his crew on an expedition to the North Pole.

Kendal Quick bids farewell to his beloved Marjorie Barlow, before Marjorie sails for Plymouth to stay with an aunt while her father, Lord Barlow, takes to the sea to battle the Spanish armada. Lord Barlow denounces Quick as a coward. Late that evening, however, two saboteurs board the ship, but Quick, who had overheard them planning the attack, is waiting for them and foils the attack. Lord Barlow apologizes for his harsh words, and Quick is now free to join the expedition.

Jibby tries to save money on a haircut.

Oliver Weed, mild-mannered historian, is invited by Uriah Mowcher to travel back to 1835 in Mowcher's new time machine.

Weed and Mowcher make plans to travel back to 1835 in Mowcher's time machine. Unknown to either one, however, Fritz, a young urchin who had run afoul of both men, has sneaked aboard and is traveling back with them.

With their parents dead, twins Ray and Gail Coeval accept an invitation from Ray's friend Willie to sail around the world with Willie and his father.

Appearing in "The Lightning Salvation"Edit

Synopsis for "The Lightning Salvation"Edit

Synopsis for "Howdy Do Soaks!"Edit

Synopsis for "The Friends Meet"Edit

Appearing in "It`s A Dern Lie"Edit

Synopsis for "It`s A Dern Lie"Edit

Retrieved from "https://heykidscomics.fandom.com/wiki/New_Comics_Vol_1_1?oldid=1620816"
Community content is available under CC-BY-SA unless otherwise noted.