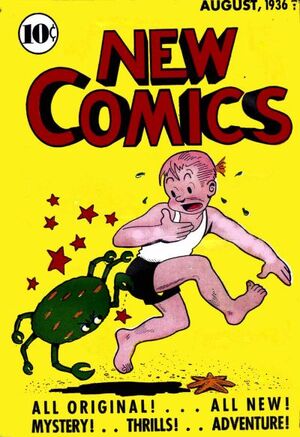 Captain Jim and his men find the rustlers' hideout. Jim orders some of his men to cover the back and side exits, then leads the rest in a frontal assault. However, they encounter no resistance, and break into the hideout to find only a mortally wounded outlaw, who tells them that Jane and Johnny have escaped. Meanwhile, Jane and Johnny are attacked by hungry wolves, but just when things look their grimmest, Captain Jim and the Rangers find the children and drive off the wolfpack. Meanwhile, at their backup camp, the outlaws plan their next move...

Appearing in "He Who Laughs Last, Laughs Best"Edit

Synopsis for "He Who Laughs Last, Laughs Best"Edit

Hash plays a practical joke on Hamburger, but it backfires in his face--literally.

Mac and Larry are taken prisoner by Blackface and his men. However, when a strange yacht enters the harbor, Blackface attacks, leaving Mac and Larry unguarded and allowing them to escape. Blackface, however, manages to take the yacht's owner, Jim Shark, captive.

Grandpa helps with a bit of memorization.

Rather than risk Marjorie's life, Quick surrenders to the Spaniards, and he, Marjorie, and Rodriguez are taken prisoner. The three Spanish ships set sail for home, and Quick is put in irons. Late one night, Marjorie sneaks into his cell and explains why she has agreed to marry Rodriguez, and that she still loves Quick. As the ships harbor off Cadiz one night, the captain summons Quick--but Quick has escaped and gone over the side!

The gunman holds Dale and Dick and begins to lead them to his boss, but an old hermit spies the trio, sneaks up behind the gunman, and hits him with a club, knocking him unconscious. He tells Dale and Dick to follow him where he can hide them.

Cal and Alec try to prove that "Knife" Ambush murdered their old friend, Pickaxe Pete. Deputized by the sheriff, Alec masquerades as Pete and accuses "Knife", who betrays his guilt and is shot by the sherrif.

A lion emerges from the jungle and attacks the leopard, while Sandor's friends, the wild dogs, come to his aid. One of them chews through his bonds and frees him, just as a hyena attacks him. Sandor disposes of the hyena and then, as the lion kills the leopard, commands the victorious beast to obey him.

With the two of them pinned down by outlaws, DuBois urges Maginnes to run and leave him behind, but Maginnes refuses. Suddenly, one of the outlaws falls from his hiding spot, shot by DuBois' daughter Yvonne. The other outlaws turn their attention to the girl and take her prisoner, and Maginnes must decide whether to leave her to her fate or to abandon her father.

Appearing in "She: Episode 2"Edit

Synopsis for "She: Episode 2"Edit

Leo is still missing as the survivors pile into the lifeboat, but Holly literally falls over him as she tries to avoid a wind-blown bit of debris. The boat is taking water, and the survivors frantically bail it out. They hit breakers, but this is the last of their trials; the storm abates, and they drift, exhausted, toward the headland. The "Ethiopian Head", the island they've been looking for, looms over them. They beach the boat for rest and food, but night finds them on the water again--with two hungry lions swimming towards them.

Jim spots Alverido up to no good, and, still in disguise, he and Kim soon find Alverido with the pearls. Jim pulls a gun on Alverido and snatches the pearls, and he and Kim make their getaway, discarding their disguises as soon as they are out of sight. But as they make plans to get out of town, they are surprised by a woman--holding a gun.

Steve, Myra, and Captain Judd are overwhelmed by numbers fighting the Zoanthropis. The Zoanthropis' leader, the Great Devachan, sentences the trio to death, beginning with Myra. Myra is bound and hangs by her wrists from a suspended beam over a volcano, while the natives use her for archery practice. Steve and Judd break free from captivity, and Steve races to Myra's rescue.

Ian and Ken arrive in Peking, still looking for Genghis Khan's treasure. They encounter Doris Willis, a friend of Ian's, and her father. Mr. Willis offers Ian a job delivering arms to the Gobi Desert. Knowing that the treasure is buried somewhere in the Gobi, Ian accepts the job. He and Ken round up their team. At the moment of departure, however, another friend of Ian's, Pan Chi-Lou, arrives with an injunction from the Chinese government, forbidding Ian from shipping the arms. Ian takes Pan prisoner, and the team departs--but an ambush awaits them.

Appearing in "Cat and Water Tower"Edit

Synopsis for "Cat and Water Tower"Edit

Though both men want to ask Miss Helen to the dance, Slim gets there first, and Tex tries to think of a way to get her instead. He takes a cat and puts it on top of a water tower, hoping that Slim will try to rescue the animal and miss the dance in the process. Slim goes to the water tower and climbs up the ladder to get the cat, but Tex takes the ladder as soon as he does. In revenge, Slim gives Tex an impromptu shower.

Appearing in "War With the Bear Sarks: Episode 7"Edit

Synopsis for "War With the Bear Sarks: Episode 7"Edit

Ivar's fleet makes landfall in unknown, and apparently uninhabited, territory. Ivar and his second start exploring, but the land is not as uninhabited as they think. The Bear-Sarks attack, killing Ivar's second and take Ivar prisoner. Djorg, the Bear-Sark chief, orders Ivar burned at the stake.

After thinking her killed by sharks, everyone is stunned to find Aunt Millie alive and well--though missing her dress. The captain comes to the conclusion that Silas Slump was the one to become shark food. Now, the question remains: what has become of Aunt Millie's treasure map?

Other features appeared in this issue. They include:

Retrieved from "https://heykidscomics.fandom.com/wiki/New_Comics_Vol_1_7?oldid=1620854"
Community content is available under CC-BY-SA unless otherwise noted.