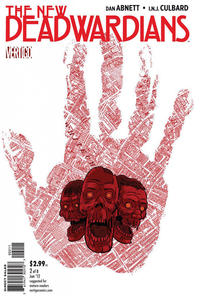 We chose to become Young because it made us dead enough to fool the fully undead. It was the only thing we cared about. We hadn't the least idea what else it might do to us.

Chief Inspector George Suttle attends the autopsy of the body that was found outside the Parliament Buildings in London, where it is confirmed beyond a doubt that this man was a member of the Young - a class of citizen who have become vampires in order to become invisible to the Restless, who have fallen prey to some kind of plague which makes them crave human flesh. This revelation is unpleasant for Suttle and the coroner Doctor Ambler, because the cause of death is not one of the three standard methods known for killing the Young.

They have identified him as a member of the Young by the fact that his incisors have been filed down, in order to de-emphasize their prominence. Likewise, he appears to have worn a bite-plate, in order to prevent himself from falling prey to 'tendencies'. His right hand was removed post-mortem, for no discernable reason. Additionally, the man's neck shows signs of small burn marks, one of which appears to be imprinted with a symbol. Suttle is interrupted by an order to meet with the Chief Superintendent, and he leaves Ambler to continue the autopsy alone.

Chief Superintendent Carstairs is quite put out to learn that the victim was a Young. He considers the cure that they took as public servants to be something like a necessary but unpleasant war-effort style sacrifice. Suttle sees it more for what it is: trading one curse for another. When they had taken the cure in order to avoid falling victim to the Restless, they had had no idea of what else it would do to them. Needless to say, if it becomes public knowledge that the Young can die off, there will be pandemonium. Carstairs urges Suttle to close the case as soon and as discretely as possible.

After returning home, Geroge has his man Roper arrange interviews for a new cook, since Ms. Henley was killed by a Restless the night before. Afterwards, he checks in on Louisa, a maid whom he had inoculated with the cure in order to keep her safe. The girl doesn't yet understand how changed she is, but she admits that she will miss the animals, as pets tend not to take to members of the Young. He is startled by a call from Carstairs, announcing that the corpse has been identified. It is Lord Hinchcliffe, an adviser to the Crown. Suttle decides to investigate without delay.

As Suttle's car passes Zone-B, he has a flashback to his service in the war. He arrives at Lord Hinchcliffe's manor in Kensington to meet the valet, Mr. Peter Peakes. The valet is surprised to hear that his master is dead. Peakes admits that his employer went out the night before last. Sometimes he would stay late at the club or the House of Lords, without his valet.

Suttle's interest is piqued more by what he cannot see in Hinchcliffe's home than what he can. The Lord left in his evening wear. A pair of cuff links, and perhaps a matching medallion were taken from their cases. One more thing of interest: Peakes has been given the cure.

Suttle visits the shop at which the cuff links and medallion were purchased, and discovers that they were made of silver. Apparently, Lord Hinchcliffe brought in his own design for the medallion. Suttle notes that it is certainly a partial match for the inverse of the burn mark on Hinchcliffe's neck. The man behind the counter suggests that the medallion must have been some kind of protective charm, as that is the only purpose he can think of for the use of silver, which is in high demand for the war effort against the Restless.

Suttle questions Peakes about his having been administered the cure, and guesses that it was not given by a doctor, but by the Lord Hinchcliffe himself. Ashamedly, Peakes admits that his master fell victim to his tendencies and bit his valet in order to trade the man's immortality for his silence about the fact that he would sneak off to the Bright's quarters in the east end, and feed on the normal humans.

After sending Peakes into custody, Suttle reluctantly decides that it is time to pay a visit to Zone-B.

Retrieved from "https://heykidscomics.fandom.com/wiki/New_Deadwardians_Vol_1_2?oldid=1455438"
Community content is available under CC-BY-SA unless otherwise noted.