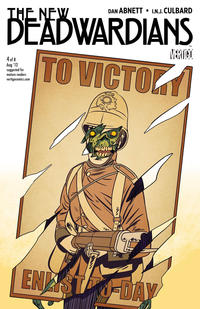 Look, the plain fact is we still don't know how the cessation of Lord Hinchcliffe's un-life was achieved, sir. Until I can prove it's murder, we've no business charging anyone.

Chief Inspector George Suttle has been cornered in Zone-B by a group of Quenchmen; Brights who are antagonistic toward members of the Young. Suttle plays on their conflicted feelings of both fear and hatred for him by warning that his status as Young empowers him to tear them limb from limb - even if they all come at him at once. He pretends that he is keenly hoping they will come at him all at once, so that he can taste their blood. However, the Quenchmen are frightened off by the approach of Constable Bowes, who would prefer to be saved the paperwork that accompanies a dead superior.

Afterwards, Suttle and Bowes take tea, and despite his absence of any appetites, Suttle feels a fancying for it. The Chief Inspector feels more alive than he has in years, though Bowes fancies that it has more to do with the girls at the thirsty house trying to expose themselves to him than anything else. Suttle explains that the worst part of being Young is that he loses all human appetites for food, drink, and life in general. He longs to feel the sensation of longing for something.

His lively experiences in Zone-B today have given Suttle a glimpse of the man he used to be. Moreover, he has also glimpsed the man that the murder victim he was investigating used to be. Lord Hinchcliffe had developed a hunger - a tendency toward drinking human blood that came with being Young. While most Young suppress those tendencies, Hinchcliffe allowed them to get worse. Today, Suttle managed to discover that Hinchcliffe had made the acquaintance of an artist called Pretendleby. Suttle and Bowes would have to canvas the area for him.

Out the window of the tea house, Suttle spots Sapphire, one of the girls from the thirsty house. He rushes out to see her, and despite her attempts to get a rise out of him - so to speak - he hands her his card and asks her to pass it around among her friends so that they might call him should they catch sight of this Pretendleby. Wittily, Sapphire suggests that he could always just come back and pump her for information, going so far as to add that she might need to be pumped quite strenuously. He turns her down for now, but muses that her perseverance is awfully sporting.

Suttle returns to Zone-A and Scotland Yard for a warrant to investigate the artist's studio. Superintendent Carstairs hopes to get the case taken care of as quickly and discretely as possible, noting that it would cause an uproar if it was discovered that some privileged sort couldn't keep his thirst to himself - especially with the protests at Zone-B and the Anti-Young sentiments among the Bright. Meanwhile, Hinchcliffe's family has got wind of the murder, and they're demanding to have his body back. Suttle isn't done with the body, and Carstairs suggests that he have a talk with Lady Hinchcliffe. Suttle also puts in a word for Constable Bowes, requesting him for a second time as his driver.

At home, George's aging mother is grumpy that he plans to be going away for a while. She has grown wary of the young maid Louisa, who recently took the Cure and become Young. Mrs. Suttle got the impression last they were together that Louisa might do her some sort of injury with her mop. Louisa admits that she has felt strange since becoming Young. She knows that she needed to take the Cure after getting bitten by a Restless, but she doesn't want to live her life the way that she must, without feeling and without appetites. Sadly, George informs her that she can't ever go back.

Bowes and George pass through the gates of Zone-B and make their way toward Zone-D; the dead zone where the Restless are allowed to roam freely. There is a perimeter, though, as the Restless tend to congregate around city fences, rather than wandering freely outside.

On the way, Bowes asks about George's past in the war. George explains that the Restless curse came at the same time as the death of Prince Albert. It seemed then as though death itself was mocking Queen Victoria. George had first been stationed at the South Coast and then moved north. Though he had never been bitten, it was five years into the war when the military demanded that all senior officers take the Cure in order to make them resistant to the Restless. It never occurred to Suttle to question his superiors, and he took it.

Afterwards, he found himself outliving his regiments, sometimes having to kill them all a second time after they were taken by the Restless curse. Despite all this, George is certain that the Restless curse was not the result of magic. Somehow, science will explain how the world changed overnight, and nothing was ever the same again.

Retrieved from "https://heykidscomics.fandom.com/wiki/New_Deadwardians_Vol_1_4?oldid=1455440"
Community content is available under CC-BY-SA unless otherwise noted.