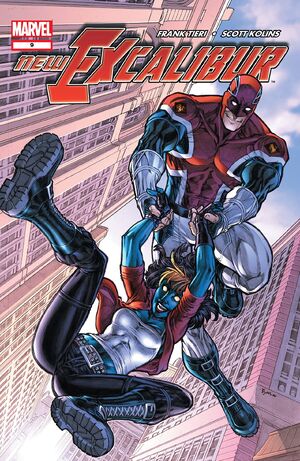 Believe it or not, I was okay lying there with that giant crater where my chest used to be. I wasn't thrilled about it, obviously, but if those were the cards I was dealt, then so be it. I'd deal with it. At least I had some bloody peace for once. So now, here I am. Did I ask to look like this? Did I even ask to be fixed up, for that matter? It ain't none of your concern, mates, because one thing's for certain...I never asked for any of you. However, there is one thing you can do for me, if you're still in a helpful mood. Passon to 'Mr. High and Mighty' Charles Xavier and whatever other 'heroes' who want to help me out...the whole lot of you can go sod off.

Retrieved from "https://heykidscomics.fandom.com/wiki/New_Excalibur_Vol_1_9?oldid=1448078"
Community content is available under CC-BY-SA unless otherwise noted.