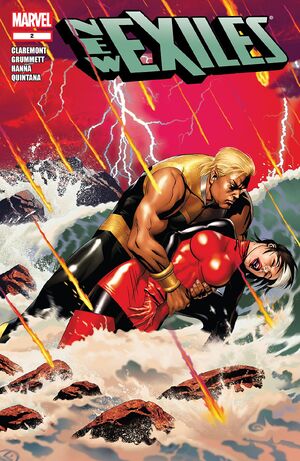 Appearing in "Flight of the Avenging Son!"Edit

The Exiles have barely arrived in a new dimension before they’re struck by disaster! Sabretooth, Psylocke and Mystiq find themselves in the middle of a long-running conflict between the two most powerful figures on the African Continent, the Black Panther and Ororo. As for Rogue, her fate ends up in the hands of a young man who calls himself Gambit — but if you think that tells you what to expect from this character and this story, try again! He needs Rogue to help him save his parents — Oh, and did we mention he breathes water?

Retrieved from "https://heykidscomics.fandom.com/wiki/New_Exiles_Vol_1_2?oldid=1448099"
Community content is available under CC-BY-SA unless otherwise noted.