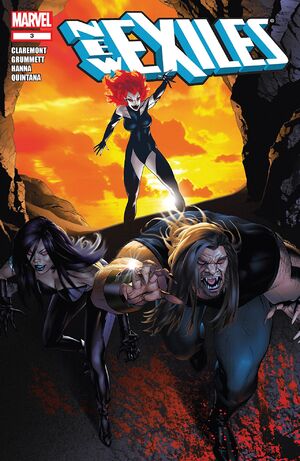 I've learned to withstand ocean pressure five miles down, Rogue. This is comparative child's-play. You're our engine, you just keep us moving ahead, the airfoil of this invisible plane will handle the rest.

Appearing in "The Panther's Vengeance!"Edit

On an Earth ravaged almost a half-century ago by a brutal storm of meteors, the first mission of the New Exiles has turned into a madcap exercise in survival against increasingly deadly adversaries. In the heart of the Central African desert, Rogue learns the identity of Gambit’s parents and the truth about his origin. At the same time, Sabretooth and Psylocke try to deal with the apparent loss of Mystiq while preparing to embark on a search and rescue mission to recover Rogue, unaware that they’ve already been caught up in an enemy’s cunning and deadly web. Instead of a rescue, this new team of Exiles may be heading straight for disaster.

Our own universe is finally numbered in the Letters Page of this book as Earth-1218.

Retrieved from "https://heykidscomics.fandom.com/wiki/New_Exiles_Vol_1_3?oldid=1448100"
Community content is available under CC-BY-SA unless otherwise noted.