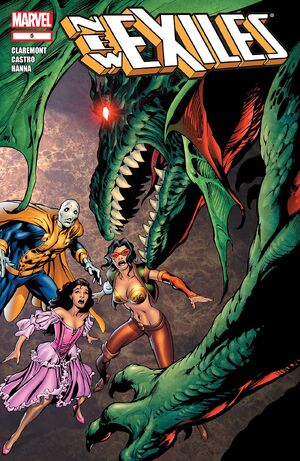 Appearing in "Did You Ever Have One of Those Days?"Edit

Double the alternate reality action this month as two issues of New Exiles bring us two tales from two different universes! First, in issue 4, Sabretooth, Psylocke, Rogue, and new ally Gambit are caught in the middle of a war between the Atlanteans, Queen Ororo, and the Black Panther. Plus, whatever happened to Mystiq? Find out in the conclusion to the series’ first arc! Then, in issue 5, a new tale begins as we see the trouble Morph, Sage, and Cat run across in a world of royalty and dragons! Reality-hopping action as only the New Exiles can deliver!

Retrieved from "https://heykidscomics.fandom.com/wiki/New_Exiles_Vol_1_5?oldid=1448102"
Community content is available under CC-BY-SA unless otherwise noted.