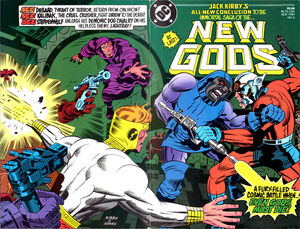 "Animated bodies"... They're shells without "identity"!

Appearing in "Darkseid and Sons"Edit

Synopsis for "Darkseid and Sons"Edit

This story is reprinted from New Gods #11.

This is the only issue of Vol 2 that contains new material. The first story is a reprint from New Gods Vol 1 11. The second story is Jack Kirby's vision of the events which occur after this, so although the appearances section lists the New Earth versions of the characters, they cannot be the chronological New Earth versions.

Retrieved from "https://heykidscomics.fandom.com/wiki/New_Gods_Vol_2_6?oldid=1444181"
Community content is available under CC-BY-SA unless otherwise noted.