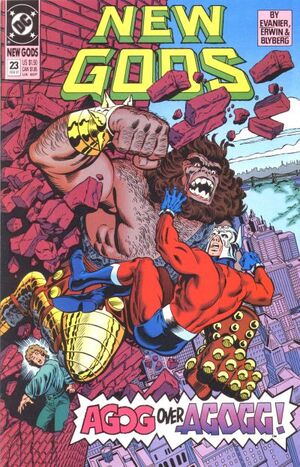 Darkseid and Desaad found that Ellis Ames, a man with a terminal disease, possessed a piece of the anti-life equation. Darkseid sent his warrior Agogg after him, and while Orion and Lightray uninitially took him to safety Agogg used his psychic profile to track down the last places Ames had been, including a music publishing company, one of many that found Ames’ work sub par, and Royer’s Children’s Hospital, where Ames played before he contracted his disease and was banned from the premises by an overly fearful nurse. Ames told Lightray how he envied him, and that how all he ever wanted was to make the world a better place than if he’d never been born. Agogg defeated Orion and Lightray in combat, and when he attacked the hospital Ames gave himself over to keep his beloved children from harm. On Apokolips he was brought before Darkseid, and when Darkseid turned his back he claimed he’d already given the anti-life equation to Agogg, and tossed himself out a window, acting like Agogg was the perpetrator. Darkseid believed the ruse and killed Agogg with the omega effect. In honor of his sacrifice Orion and Lightray gave Ames a heroes’ funeral.

Retrieved from "https://heykidscomics.fandom.com/wiki/New_Gods_Vol_3_23?oldid=1444204"
Community content is available under CC-BY-SA unless otherwise noted.