Start a Wiki
Part of the 'Days of Future Present' event 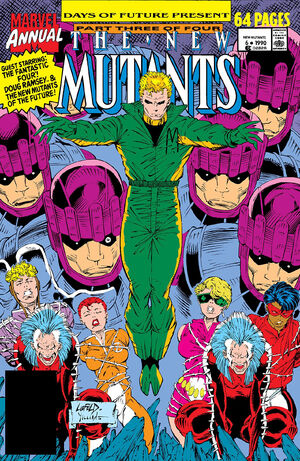 Appearing in "The Once and Future Mutant"Edit

"Days of Future Present, Part 3!" Guest-starring the Fantastic Four. An adult Franklin Richards shows the muties a taste of their own future, but he's being tracked by deadly Sentinels.

Appearing in "Tribute the Second"Edit

Synopsis for "Tribute the Second"Edit

"Glimpse Into the Future", by Rob Liefeld

"Cable", by Rob Liefeld
Add a photo to this gallery

It contains the first appearance of Shatterstar.

Retrieved from "https://heykidscomics.fandom.com/wiki/New_Mutants_Annual_Vol_1_6?oldid=1723201"
Community content is available under CC-BY-SA unless otherwise noted.