Part of the 'Kings of Pain' event 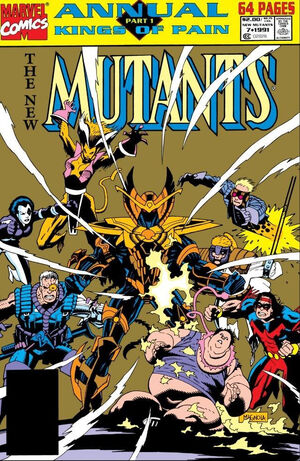 Appearing in "Pawns of Senescence (Kings of Pain, Pt. 1)"Edit

Synopsis for "Pawns of Senescence (Kings of Pain, Pt. 1)"Edit

Freedom Force begins a commando assignment into Iraq, to obtain the German scientist Reinhold Kurtzmann and bring him to the Allied forces. The team stops an Iraqi tank patrol and begins taking out guards, killing everyone. They find the location they were heading for to obtain the doctor, but find it empty. Too late, they realize that they are trapped, and Crimson Commando is injured and Super Sabre is beheaded. As Blob and Pyro cry out for the villains to show themselves, a group appears out of thin air, announcing itself to be the Desert Sword.

Appearing in "Close Encounters of the Mutant Kind"Edit

Synopsis for "Close Encounters of the Mutant Kind"Edit

Artie, Leech, and Wiz Kid celebrate a Thanksgiving concert with Cyclops and Jean, and Taki decides to cheer up the other two by giving them a ride on his new flying saucer. The saucer scares some of the locals, including Ida Fassbender, a UFO fanatic. As the locals are frightened and prepare to kill the “aliens,” Ida stops them, and takes the children into her home. Leech mistakes her for his dead mother, and Ida promises that though she can’t be a mother to them, she can still be their "Grammie" and they can visit anytime.

Retrieved from "https://heykidscomics.fandom.com/wiki/New_Mutants_Annual_Vol_1_7?oldid=1753048"
Community content is available under CC-BY-SA unless otherwise noted.