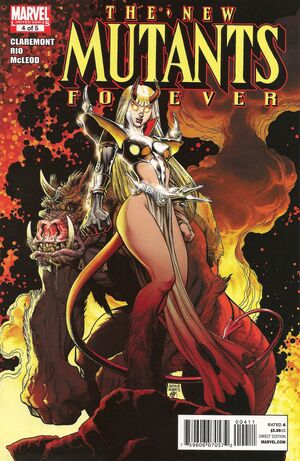 Appearing in "Living -- a Nightmare!"Edit

As Doug Ramsey struggles with the hideous transformation he has undergone at the hands of the Red Skull, his once best friend, Warlock, has decided it’s time to take him down! Meanwhile, Magik, Cannonball, and Sunspot work hand in hand with Selene to rally the people of Nova Roma to their cause! Legendary X-scribe Chris Claremont teams with spectacular art team Al Rio and Bob McLeod to bring us the next chapter in the tale of Xavier’s young pupils!

Retrieved from "https://heykidscomics.fandom.com/wiki/New_Mutants_Forever_Vol_1_4?oldid=1448141"
Community content is available under CC-BY-SA unless otherwise noted.