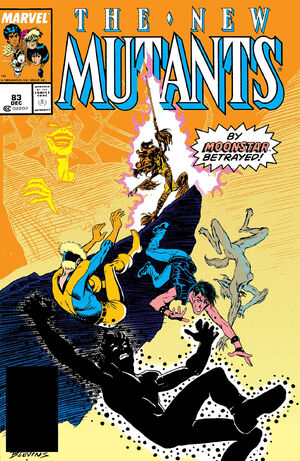 Appearing in "The Quick and the Dead"Edit

Synopsis for "The Quick and the Dead"Edit

Boom-Boom, Warlock, and Prince Hrimhari are threatened by a giant, which the arrival of an even larger ally takes care of. Elsewhere, Hela commands Eitri to forge a sword with which to slay Odin. We also see she has prisoners - Mist, a Valkyrie being twisted by Hela's dark magic, Cannonball, Sunspot, Wolfsbane, and Rictor. In Nastrond, the mutants large ally is revealed to be Tiwaz, and Hrimhari reveals he was who they sought. Back with Hela, the prisoners make a prison break while Hela is distracted. Freeing the Einherjar, they return to Hela's chamber to wrest the sword from her before its enchantments are finished. Cannonball grabs the sword and the New Mutants make a break for it. Danielle Moonstar, not distracted by the Einherjar assault, pursues them. The New Mutants, betrayed by Mist unintentionally as her mind becomes more corrupted by Hela's magic, get forced off a cliff over pit of boiling lava. Hela reclaims the sword, but of the New Mutants there is nothing to be found. Hela finishes enchanting the weapon, and others notice. On earth, Rusty watches as Vulture is locked up in an adjacent cell.

Retrieved from "https://heykidscomics.fandom.com/wiki/New_Mutants_Vol_1_83?oldid=1448229"
Community content is available under CC-BY-SA unless otherwise noted.