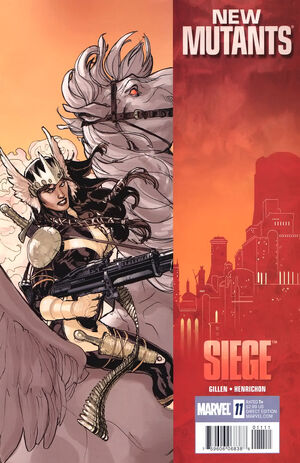 SIEGE BLOCKBUSTER TIE-IN!! Back in DARK AVENGERS/UNCANNY X-MEN:UTOPIA, Dani Moonstar made a deal with Hela. Now, the mistress of Hel is calling in her marker. With all the Asgardians falling in the Siege of Asgard, someone needs to deal with the dead. And who better to do so than a Valkyrie. But where is Dani supposed to be bringing these dead? Brought to you by a guest creative team of Kieron Gillen (THOR, S.W.O.R.D.) and Niko Henrichon (PRIDE OF BAGHDAD).

Retrieved from "https://heykidscomics.fandom.com/wiki/New_Mutants_Vol_3_11?oldid=1760993"
Community content is available under CC-BY-SA unless otherwise noted.