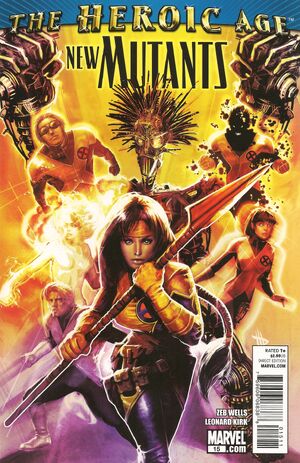 Appearing in "Fall of the New Mutants (Part 1)"Edit

“FALL OF THE NEW MUTANTS” LEONARD KIRK JOINS THE NEW MUTANTS! Fan-favorite artist Leonard Kirk (DARK X-MEN, CAPTAIN BRITAIN & MI-13) becomes the regular NEW MUTANTS artist this issue! Coming out of SECOND COMING, the New Mutants who are still left are licking their wounds on a forced R & R trip. While they try and put themselves back together, others are looking to take them apart. The strange secretive military group we met in NEW MUTANTS #09 has an agenda involving Illyana Rasputin. And they don’t want to give her a medal.

Retrieved from "https://heykidscomics.fandom.com/wiki/New_Mutants_Vol_3_15?oldid=1650923"
Community content is available under CC-BY-SA unless otherwise noted.