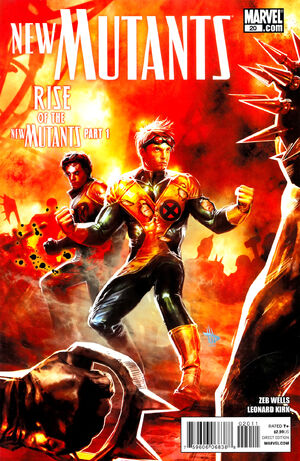 Appearing in "Rise of the New Mutants (Part 1)"Edit

Synopsis for "Rise of the New Mutants (Part 1)"Edit

Pixie, Karma and Magik return to Utopia. Meanwhile, General Ulysses prepares to unleash the power of the Bloodstone Amulet upon the demons of limbo. Dani manages to free herself and shoots Loca in the face with an arrow.

Karma expresses dissatisfaction with Magik leaving Face behind in Limbo and Magik stabs her with the Soulsword. She takes the X-Men to Project Purgatory's gate to Limbo but finds that they are too late. Meanwhile, Karma enters the mind of Legion and wields the Soulsword. After searching through his mind she finds a deranged version of David who refers to himself as "the real me"

Retrieved from "https://heykidscomics.fandom.com/wiki/New_Mutants_Vol_3_20?oldid=1650924"
Community content is available under CC-BY-SA unless otherwise noted.