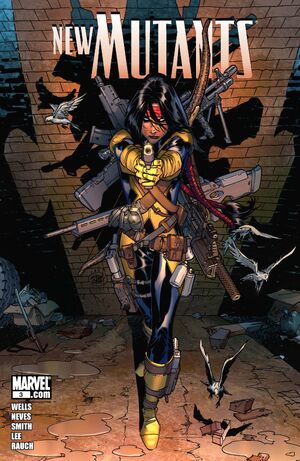 Ask yourself if you really want me out of this cage, Legion. You need to think about that real hard.

He explains that there are hundreds, possibly thousands of personalities because Bishop used a knife made of "David-though" and sent them to the No-Time, where the evil personalities enslaved some of the others, like him, who is now being forced to kill Dani. He creates a stone-construct in her cell which starts choking her, but it is destroyed by Magma just in time.

Magik suggests entering Legion's mind by touching Karma in order to save her, while Magma, Cannonball, Sunspot and Dani try to stop Legion in order to bring him to Emma Frost. Cannonball tells Illyana not to kill any of Legion's personalities, since he could die if one of the personalities dies in his mind-scape, and if he dies so does Illyana and Karma. Magik threatens Jack Wayne with the soulsword, but he calls her bluff, saying he heard Cannonball forbid her from killing any of them. Magik proceeds to kill Jack Wayne and two other personalities.

Retrieved from "https://heykidscomics.fandom.com/wiki/New_Mutants_Vol_3_3?oldid=1448260"
Community content is available under CC-BY-SA unless otherwise noted.