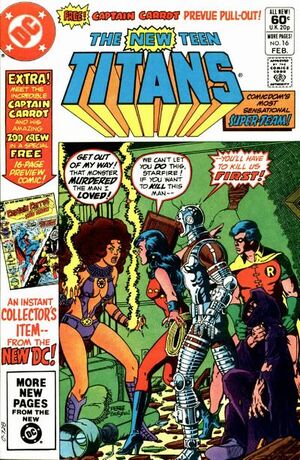 Synopsis for "This Bunny Unbound!"Edit

Across the United States, strange occurrences take place involving otherwise normal human beings acting like animals. Clark Kent broadcasts a report on the phenomena, after which, he changes clothes to investigate the matter more deeply as Superman. He sees a strange beam of energy, visible only to his enhanced Kryptonian senses, strike a man, seemingly devolving him so that he begins scampering about the streets like an ape. He swoops down and pulls the man safely out of busy traffic, then flies off into the outer atmosphere to trace the origin of the energy beam. He surmises that the energy beam originated somewhere near the planet Pluto. What Superman finds though is a barrier of energy encircling the Earth. The closer he comes to it, the weaker he grows. He sees a meteor from outer space pierce the barrier and begin falling towards Earth. He catches the object and propels it back towards the barrier.

As he makes contact with the energy barrier, a loud "Pop" occurs and Superman finds himself dizzy and temporarily blinded. Blinking away the spots before his eyes, he begins falling back towards Earth. He soon realizes however that contact with the energy barrier somehow transported him to a parallel reality. He flies towards what he believes is the Daily Planet building, but quickly discovers that it is actually the office of a talking rabbit named Roger. Before Roger sees him, Superman changes into his civilian attire. Roger is at first frightened by the big "pink" man, but Clark manages to calm him down. He learns that this entire world is populated with sentient anthropomorphic beings, similar to animals found on Earth. While attempting to explain his situation, Roger goes to his window box and takes a carrot. He doesn't realize that the carrot is glowing with a mysterious energy. Superman scans the vegetable with his x-ray vision and sees that it has been affected by radiation from the shattered meteor particles. He snatches the carrot from Roger's hand and throws it away before he can eat any more. It is too late however. The glowing carrot alters Roger's physical body, giving him enhanced senses and super-strength. Donning a costume he had laying about from a previous costume party, he begins calling himself Captain Carrot.

Superman and Captain Carrot discover that violent riots are taking place at the nearby United Nature Building in Gnu York. The U.N. delegates have de-evolved and are behaving instinctively like their animal namesakes. Roger creates a super-thump with his giant foot, and succeeds in at least temporarily calming everybody down. Superman deduces that the meteor that he pushed through the energy barrier, shattered upon entering this parallel world, and that fragments of it have enhanced several other animal people across the country. His primary concern however is the devolution ray that has affected the members of the U.N. This ray is also responsible for devolving the people from Superman's home dimension. Superman flies off to investigate the origin of this mysterious ray beam, citing that the fate of two worlds hangs in the balance. Roger Rabbit takes a super-bunny leap behind him and shouts "You're not going anywhere without – Captain Carrot!"

Retrieved from "https://heykidscomics.fandom.com/wiki/New_Teen_Titans_Vol_1_16?oldid=1673224"
Community content is available under CC-BY-SA unless otherwise noted.