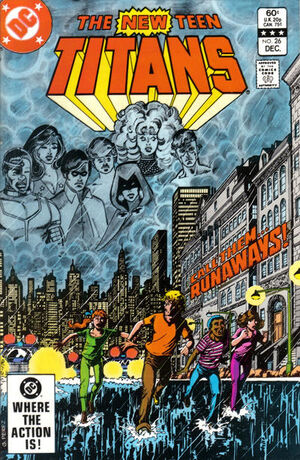 The New Teen Titans return to Earth from the Vega system, and Robin, having revealed his true feelings during the battle, begins a romantic relationship with Starfire. Several weeks pass uneventfully. Then, Dick and Kory, on a movie date, witness the accidental death of a drug-crazed youth who attacks D.A. Adrian Chase and his wife before running into the path of a car. The next day, at the site of the Statue of Liberty, Changeling battles a young costumed girl, who calls herself Terra.

Retrieved from "https://heykidscomics.fandom.com/wiki/New_Teen_Titans_Vol_1_26?oldid=1673235"
Community content is available under CC-BY-SA unless otherwise noted.