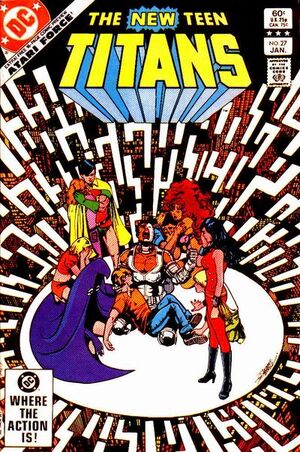 Raven heals the wounded youth at the cost of almost being taken over by the spirit of her demonic father, Trigon. The boy proves to be the older brother of the teenager whose death Dick and Kory had witnessed (in the previous issue). He had come to New York to investigate his brother's death only to be set upon and nearly killed by gangsters employed by drug czar Anthony Scarapelli. Returning to the youth center, the Titans meet with Adrian Chase and Roy Harper, the latter working as a liaison between federal and local authorities in drug-related cases. Leaving with the Titans, Roy resumes his identity as Speedy, and together the young heroes break up Scarapelli's plans to have his new drug shipment distributed throughout the city by duped teenage runaways. Two of the youngsters, however, are killed in the melee, despite the Titans' efforts.

Retrieved from "https://heykidscomics.fandom.com/wiki/New_Teen_Titans_Vol_1_27?oldid=1673237"
Community content is available under CC-BY-SA unless otherwise noted.