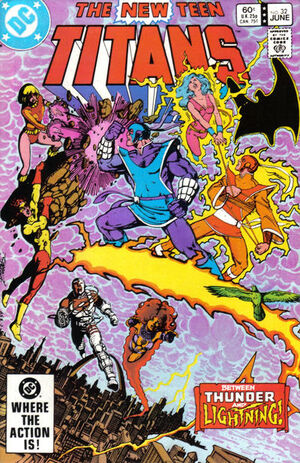 God, you'd think you jerks could come up with snappier dialogue.

Appearing in "Thunder and Lightning!"Edit

Synopsis for "Thunder and Lightning!"Edit

Two costumed youths calling themselves Thunder and Lightning wreak unexplained havoc in the streets of St. Louis with their superhuman powers.

The Titans return from Zandia in a somber mood, the tension broken only by Speedy's antics, as he bids his teammates farewell and returns to his work with the drug centers.

Frances returns to Blue Valley and Robin to his private pursuits, so when the Titans are summoned to deal with Thunder and Lightning, it is Wonder Girl who leads them into action. After an inconclusive battle, Thunder and Lightning reveal that they are the children of an American soldier named Walter Williams and a Vietnamese woman, and are searching for their father, who may hold the secret of controlling their devastating elemental powers. Learning that Williams's last known residence was in a Maine fishing village, the brothers go there, but are fought to a standstill by the Titans until Wonder Girl (through Wonder Woman's Pentagon connections as Diana Prince) learns that their father has disappeared without a trace after a laboratory accident. Thunder and Lightning voluntarily surrender themselves to S.T.A.R. Labs in hope of a cure, while the Titans vow to continue the search for Walter Williams.

Retrieved from "https://heykidscomics.fandom.com/wiki/New_Teen_Titans_Vol_1_32?oldid=1512418"
Community content is available under CC-BY-SA unless otherwise noted.