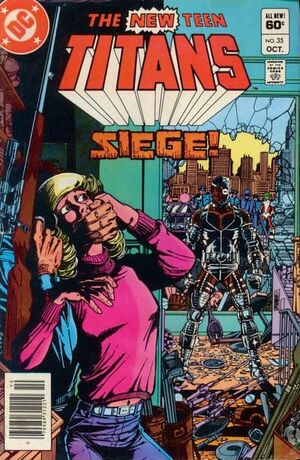 Sarah Simms is accosted on the street by Mark Wright, who insanely persists in claiming to be her fiance after she has told him repeatedly that they were never more than friends and co-workers. When a police officer intervenes in their altercation, Mark attacks him and takes his weapon. Now armed and raving, he drags Sarah into a nearby sporting goods store, which he takes over at gunpoint, wounding a cashier who tries to stop him. Using a rifle from the store merchandise, Mark holds off the police, who surround the shop, while Sarah takes advantage of his distraction to place a whispered phone call to Titans Tower. Cyborg, Changeling, and Raven, the only Titans on hand at the moment, arrive almost immediately, but their initial efforts to enter the store and disarm Mark meet with failure. While Changeling talks to the police, Raven teleports inside and tries to calm Mark, while Cyborg uses a finger-laser to enter the building through the ceiling. Finally, confused and surrounded, Mark puts down his weapon and collapses into Raven's arms.

Retrieved from "https://heykidscomics.fandom.com/wiki/New_Teen_Titans_Vol_1_35?oldid=1673241"
Community content is available under CC-BY-SA unless otherwise noted.