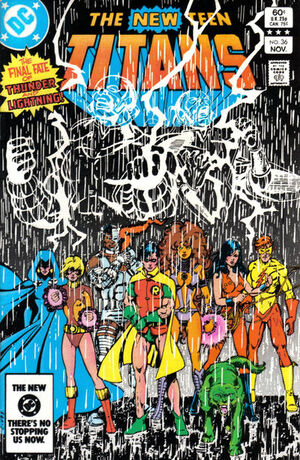 The Teen Titans are assembled at S.T.A.R. Labs, where Dr. Jenet Klyburn is attempting unsuccessfully to cure Thunder and Lightning of their unwanted powers. When their containing machinery explodes from an energy over-load, a brief and senseless battle ensues between the twin brothers and the Titans, until Raven, despite the danger to herself, offers to use her soul-self to learn the whereabouts of their missing father.

Thus it is revealed that the man who called himself Walter Williams was actually an extraterrestrial being who had been the sole survivor of a crash-landing on Earth six hundred years ago, and who had returned to Vietnam, the site of the crash, in the guise of an American soldier, to retrieve his space ship. Almost killed when he accidentally triggered the ship's security devices, he made his way back to American-held territory, where he met and shared a romance with the Vietnamese woman who became the mother of Can and Tavis.

Retrieved from "https://heykidscomics.fandom.com/wiki/New_Teen_Titans_Vol_1_36?oldid=1673243"
Community content is available under CC-BY-SA unless otherwise noted.