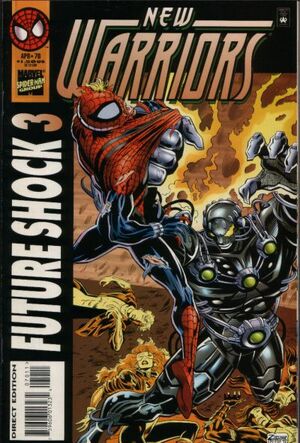 "Future Shock"—Part 3 of 4. His name is Advent, and he's journeyed from tomorrow to end Spider-Man's career today! How can the Warriors stop him when they're trapped in the twisted world of the future? Plus: the secret of Speedball's death!

Retrieved from "https://heykidscomics.fandom.com/wiki/New_Warriors_Vol_1_70?oldid=1725656"
Community content is available under CC-BY-SA unless otherwise noted.