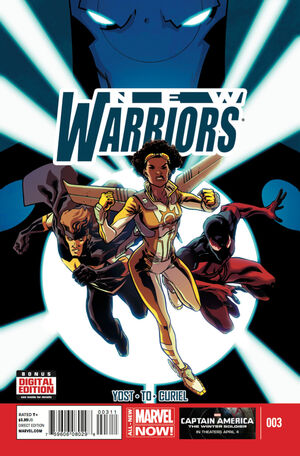 THE KIDS ARE ALL FIGHT!

• The all-new NOVA has tea with the High Evolutionary as a world-wide genocide approaches.

• Why does the High Evolutionary want to kill anything that’s not human? Is he a hero or villain? The answers are here!

• PLUS! As the New Warriors gather in New York, a captured SCARLET SPIDER meets Nova, and one of them REALLY annoys the other. Guess.

Retrieved from "https://heykidscomics.fandom.com/wiki/New_Warriors_Vol_5_3?oldid=1643382"
Community content is available under CC-BY-SA unless otherwise noted.