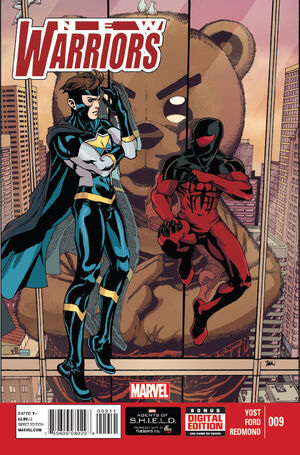 Appearing in "The New Warriors Surived Their Run-In With The Inhumans... now it's time to try to get them home."Edit

• It’s the anti-buddy movie as odd couple JUSTICE and SCARLET SPIDER hit the road together, heading for HOUSTON, TEXAS.

• Scarlet Spider never wanted to be on a team, with… people. And this issue, he shocks no one by QUITTING!

•Can Justice convince him to stay? No! Can they dude-bond by fighting a hundred foot tall guy in a bear suit? Probably not!

Retrieved from "https://heykidscomics.fandom.com/wiki/New_Warriors_Vol_5_9?oldid=1517074"
Community content is available under CC-BY-SA unless otherwise noted.