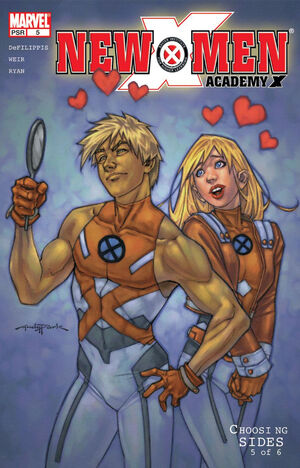 --LISTEN UP! You've all been talking. Gossiping. About one of our classmates is going to go to jail. You should be ashamed of yourselves. He's a mutant. Just like you and me. Some flatscan from the FBI shows up and says he's dangerous. And you all believe it? So Kevin Ford is dangerous? We all are. We're the next next step in evolution and they want to shut us down. And all you can do about it it gossip. Take a good look at Kevin 'cuz he could be you.

Appearing in "Choosing Sides 5 of 6: Above the Law"Edit

Synopsis for "Choosing Sides 5 of 6: Above the Law"Edit

Retrieved from "https://heykidscomics.fandom.com/wiki/New_X-Men_Vol_2_5?oldid=1505957"
Community content is available under CC-BY-SA unless otherwise noted.