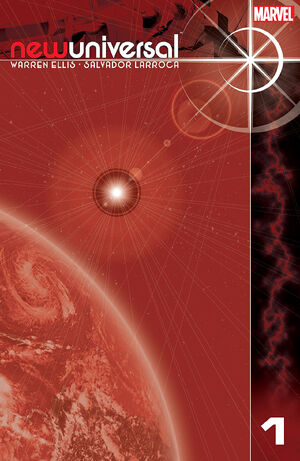 March 1, 2006 (the night before): In New York City, Surgeons complete work on John Tensen, who they describe as "98% with most of a bullet stuck in his brain". They also call him "lucky": if the bullet hadn't lost most of its inertia when it passed through another cop, Detective Tensen would be 100% dead. In Optima Down, Oklahoma (Pop. 21,000), Kenneth Connell and girlfriend Madeline Felix get drunk in a local bar. In San Francisco, Izanami Randall storms out of a party in her friend Louise's loft, telling her to "lose her number" until she dumps her racist "scumtard" boyfriend.

Later that night, back in Optima Down, OK, Ken and Madeline lay in field overlooking the sea. Both drunk, the two stare up at the moon. (Or as sheriff Dan Felix calls it, "the Chinese Moon", due to all the Chinese moonbases staring down at them.) Madeline (who is also a bit stoned) teases a slightly sick Ken before the two of them drift off to sleep.

In John Tensen's room at St. Mellion's Hospital, the television plays a MAXNews report on Tensen's condition: the two emergency operations following the shooting incident on Avenue B were only partially successful. He is stable, and being prepped for another operation this evening. A colleague describes the solitary Tensen as "living for the police"; Tensen's nurse scoffs when he hears this, saying that he has house plants more "living" than Tensen. The nurse goes to shut the blinds, making sure no "Paprazzi freak" will be able to see him. He is distracted by the brilliant white flash of the White Event. The flash sweeps across the globe. On the northeast coast of Latvia, the land shifts violently.

Izanami Randall is awakened (or so she believes), by the glowing of a crescent-and-star-shaped mark around her eyes. She wakens to see a bright, orange sky, and that the ground beneath her has become a deep blue ocean, filled with hundreds of sleeping faces just below the surface. She knows she must be dreaming. "YES, IT'S A DREAM," a voice booms behind her, "BUT YOU'RE AWAKE IN IT." She turns to find a vast, technological construct staring back at her. "THIS IS A PARADIGM SHIFT. EVERYTHING YOU KNOW HAS CHANGED. PLEASE REMAIN CALM."

Back in New York, John Tensen's nurse is amazed by the passing white light. Amazement turns to shock, however, as the window, television, and equipment in the room begin to shatter, and Tensen begins to levitate above the bed. The nurse cowers in a corner as a single blast of force rocks the room, and Tensen, now bearing a lightning-bolt-shaped scar across his chest, floats back down to the bed. Tensen awakends, and rises from the bed.

"...no. Yes. If I had to. I'm sorry... I get points for honesty, right?" He doesn't. John Tensen raises an empty fist. It comes down bearing a knife. with the nurse dead, John Tensen wipes his bloodstained hands on the wall. He could see everything Reid had ever done. No guessing, no instinct, no evidence. He retreats from the room, leaving the word "JUSTICE" scrawled in blood on the wall.

The next morning in Latvia (11.04 local time), field direction Leonard Carson and supervisor Hannah Ballad of Ballad Logistic drive toward their archaeological dig north of the ventspils. Hannah informs Ballad of the landslip, and the "whiteout", regretting they slept through it. Carson is less concerned with the recent celestial event (which sounds too much like Day of the Triffids for his tastes) and more with finding what he suspects are the remains bronze-age culture in eastern Europe (which Ballad thinks is just plain crazy). Carson is convinced that the ancient Sumerian cities of Ur and Uruk, while advanced, may not have been the only massive human cities of the time. He is particularly taken with the interaction between the Sumerians and the Europeans, who exchanged tales of god-kings (the Sumerian tale being that of Gilgamesh). The vast Latvian valley, settled by Indo-European tribes who had no written language, seems to him to be the ideal place to search. The two archaeologist lovers' argument is interrupted by an assistant to who tells them the landslip exposed a tomb. Inside the tomb, they find dig foreman Jim Braddock and his men are already hard at work. The sarcophagus is sophisticated in design, and inside they find an armored skeleton. He wears a horned helmet and bears a sword and shield. A small, starburst-shaped mark is etched into his skull.

Back in Optima Down, Ken Connell awakes to find Madeline's body burnt beyond recognition. stunned, he begins to back away, never noticing that large, starburst-shaped formation that has been burnt into the field around them.

Later, Ken Connel sits in a cell in the Optima sheriff's office. Sheriff Dan Felix, Madeline's father, storms into the office, ready to kill Connel, the only suspect in his daughters horrific death. Felix tries to drag Connell to his feet, but lets him fall to the jailhouse floor. The other officers try to talk Dan out of it: there's no evidence it was Ken. In the end they can't really blame him for his rage, and just stand aside as he puts a gun to Connel's head. Ken notices, perhaps for the first time, a bright, starburst-shaped pattern glowing in his palm.

"Big light in the sky. Everybody looks. In the morning, everyone who looked is blind, and then big walking plants sting all the blind people to death. The end."

Retrieved from "https://heykidscomics.fandom.com/wiki/Newuniversal_Vol_1_1?oldid=1448565"
Community content is available under CC-BY-SA unless otherwise noted.