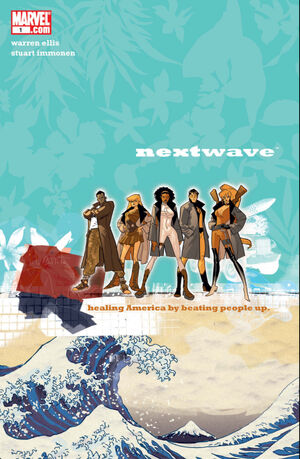 Oh my God. It's wearing underpants.

In a coffee shop in Abcess, North Dakota, Elsa Bloodstone and the Captain discuss the colorful history of his name. They are in the small town investigating a mysterious excavation being undertaken by the Beyond Corporation.

At the same time Aaron Stack, Monica Rambeau, and Tabitha Smith, en-route to Abcess in the Shockwave Rider, are contacted by Dirk Anger, leader of the anti-terroist organization H.A.T.E. and also their former boss. In the discussion they reveal to Dirk Anger their recent unauthorized departure from H.A.T.E. and the theft of the Shockwave rider is based on their discovery that H.A.T.E. is funded by the Beyond Corporation which in turn was purchased by S.I.L.E.N.T., a terrorist cell. They also discover that the Beyond Corporation's intention is to test new weapons on the general public.

In Abcess the excavation successfully unearths Fin Fang Foom, the mountain sized purple underpants wearing dragon. While The Captain and Elsa prepare to deal with the situation while the Shockwave Rider makes its way to reinforce them a group of strange metal faced men suddenly attack, forcing Elsa to deal with them. Killing one she discovers that they aren't people but actually plant based robots grown from genetically modified kelp.

The Shockwave rider arrives at it's destination. Tabitha flies out to confront the dragon.

Retrieved from "https://heykidscomics.fandom.com/wiki/Nextwave_Vol_1_1?oldid=1448566"
Community content is available under CC-BY-SA unless otherwise noted.