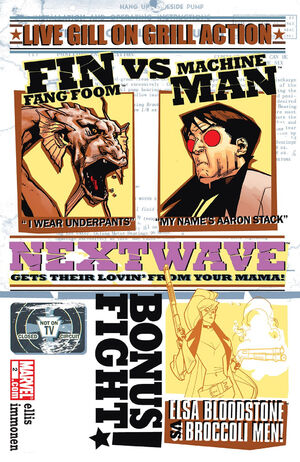 As Fin Fang Foom shovels fistfuls of the residents of Abcess, North Dakota into his mouth Tabitha Smith attacks it with her concentrated explosions. Fin Fang Foom attempts to put her in his pants but she is saved from this fate by The Captain who breaks off a finger of the dragon's left hand.

Monica Rambeau leaves the Shockwave Rider and enters the fight against Fin Fang Foom. Unable to damage it with her energy powers Nextwave plans to send Aaron Stack inside of the dragon to destroy it from the inside. With Elsa Bloodstone shooting the dragon in the eyes to get it to open it's mouth, Aaron leaps down it's gullet until he reaches its stomach where he proceeds to unleash his many sawing and cutting devices. Fin Fang Foom collapses, vomits up a large amount of his organs, and apparently dies.

Nextwave climb back into the Shockwave Rider and blast off to their next destination.