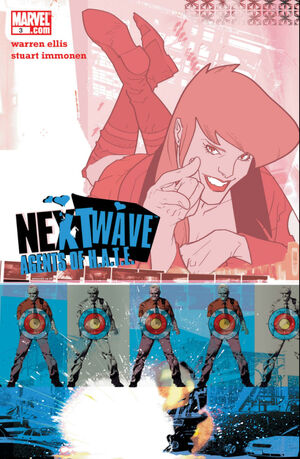 In Sink City, Illinois Officer Mangel is facing retirement. A corrupt policeman who uses his power to abuse and extort he commits a number of crimes before being attacked by what at first appears to be a stray cat but is actually a Beyond Corporation super-weapon called Ultra Samurai Seed.

A little while later Tabitha Smith happens accidentally on Officer Mangel who is undergoing a transformation, eating the bumper off of a car that he seconds later chucks at Tabitha. To make matters worse the city is suddenly crawling with Beyond Corporation's bio-bot Human Resource goons. Tabitha calls in backup and the Nextwave make short work of the HR bots with Elsa in a car in hot pursuit of Officer Mangel who is headed for a school to presumably eat some small children.

Elsa jumps out of her car at high speeds, letting it hit Mangel straight on, but after the ensuing explosion Mangel is revealed to be not only unharmed but actually bigger, and having absorbed the car into himself as armor.