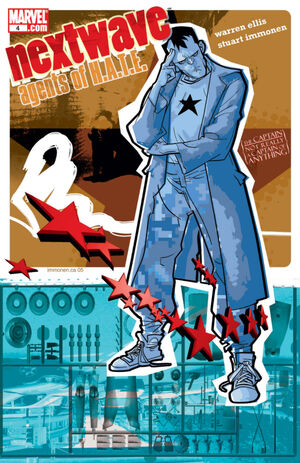 Cops--the most annoying fleshy ones of all.

In the streets of Sink City, Illinois The Captain and Elsa Bloodstone continue their battle against the Beyond Corporation transformed Officer Mangel. After the Captain tosses Mangel into a junkyard the cop-monster uses the metal to further his transformation into a massive robot like creature. The robo-Mangel shoots The Captain into the sewer system with a building sized bullet but because of an insult by Elsa earlier he decides to sit the rest of the battle out.

Aaron Stack discovers the robo-Mangel's weak spot and Tabitha Smith uses her concentrated explosions to destroy him. Officer Mangel and the super-weapon that transformed him, the Ultra Samurai Seed, are blown free but Tabitha destroys the Seed. Tabitha and Aaron then kick the bewildered Mangel out of hatred for cops before Monica Rambeau shows up and saves him. However she unknowingly turns him over to the residents of Sink City who remember his cruel and corrupt abuses. Before Nextwave leaves the town Monica hears the gunshots of the implied alley murder of Officer Mangel.

This issue features, in a flashback, the origin of The Captain's superpowers.

This is the only issue of 'Nextwave: Agents of H.A.T.E.' not to have an appearance by Dirk Anger.

Retrieved from "https://heykidscomics.fandom.com/wiki/Nextwave_Vol_1_4?oldid=1448569"
Community content is available under CC-BY-SA unless otherwise noted.