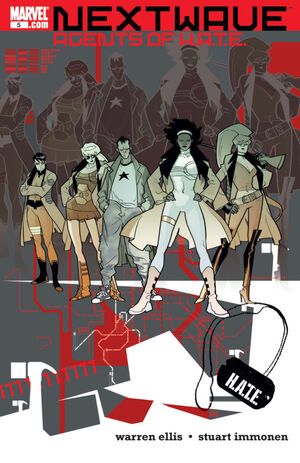 While engaging in bullemic purging Dirk Anger is informed that the Nextwave is on their way to a Beyond Corporation War Garden in the state of Wyoming. He orders the Aeromarine to get there so that H.A.T.E. can lay a trap for the Nextwave.

The Nextwave arrive at War Garden 6, discovering it is a field where Human Recourses operatives are grown. They decide the best choice is to destroy them before they become the disposable soldiers of the Beyond Corporation. However the H.A.T.E. Aeromarine shows up and Dirk Anger immediately attacking them with super-weapons, from carnivorous mutated Koala Bears to blade covered robotic Samurai. The issue ends with Monica Rambau wounded and Dirk Anger in victorious ecstasy.

This issue features cameos by a number of high profile Marvel characters in flashbacks, including The Avengers, the Celestials, and Cable.

Retrieved from "https://heykidscomics.fandom.com/wiki/Nextwave_Vol_1_5?oldid=1448570"
Community content is available under CC-BY-SA unless otherwise noted.