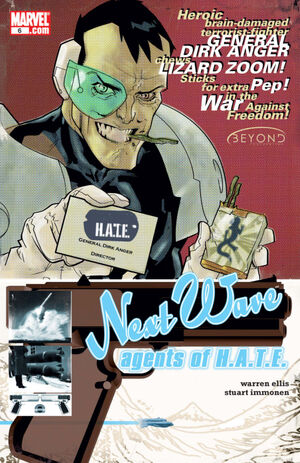 No good can come of a robot in a bra.

Nextwave continues their battle against Dirk Anger's onslaught of outrageous super-weapons. Aaron Stack breaks into the H.A.T.E. Aeromarine with an apparent plan while Monica Rambeau floods the ship with radiation in an attempt to get Anger to call off his forces. Anger ignores this.

Aaron addresses Dirk Anger directly, holding hostage an old dress he apparently stole from Dirk's quarters. After threatening to burn the dress Dirk stands down the assault, flying off in the Aeromarine, leaving Aaron to gloat about his victory.

Retrieved from "https://heykidscomics.fandom.com/wiki/Nextwave_Vol_1_6?oldid=1448571"
Community content is available under CC-BY-SA unless otherwise noted.