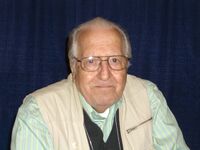 Nick Cardy (born Nicholas Viscardi, October 20, 1920), a.k.a. Nick Cardi, is an American comic book artist best known for his DC Comics work on Aquaman, the Teen Titans and other major characters, and for his highly attractive rendering of female characters referred to by fans as "Cardy Babes". He was inducted into the Comic Book Hall of Fame in 2005.

In 1950, Cardy began his decades-long association with DC Comics, starting with the comic book Gang Busters, based on the dramatic radio show. He began developing his breakout reputation with Tomahawk, his most prominent series at the time, which starred a white American colonist fighting the British undercover as an Iroquois Indian during the American Revolutionary War.

From 1962-1968, he drew the first 39 issues of Aquaman (whose character had previously starred in a backup feature in Adventure Comics), and all its covers through the final issue (#56, April 1971). In the book The Art of Nick Cardy, he recalled that, "Ramona Fradon had been drawing the character but was moving on for some reason. I remember being in [editor] Murray's [Boltinoff] office with Ramona during the transition. ... Anyway, they must have liked my work because when the character got his own series, they made me the artist".

From 1966-73, Cardy penciled or inked — sometimes both — all 43 issues of Teen Titans, a light-adventure series featuring the superhero sidekicks Robin, Wonder Girl, Kid Flash, Aqualad and Green Arrow-protégé Speedy. In 1968-69, he drew the fondly remembered but short-lived, quirky Western series Bat Lash, about an expert gunslinger who was nonetheless a dandy, and who, in a nod to 1960s counterculture, wore a flower in his hat. Cardy during this time also assisted artist Al Plastino, a childhood friend, on the Batman syndicated comic strip.

Cardy became the primary DC cover artist from the early to mid-1970s, giving the company's line a uniform, clean, understated, yet illustrative look — similar to that of fellow DC cover artist Neal Adams but with less weight and dimensional shadow.

Cardy left comics in the mid-1970s for the more lucrative field of commercial art. There, under the name Nick Cardi, he did magazine art and ad illustrations, including advertising art (though not necessarily the "one-sheet" movie posters) for films including The Street Fighter (1974), The Night They Robbed Big Bertha's (1975), Neil Simon's California Suite (1978), Stanley Donen's Movie Movie (1978), Martin Ritt's Casey's Shadow (1978), and Francis Ford Coppola's Apocalypse Now (1979). He added the images of the droids to the art for the Star Wars (1977) one-sheet.

Residing in Florida as of 2005, the veteran artist appears at comic-book conventions and draws commissioned art. On Friday, July 15, 2005, at San Diego Comic-Con's 17th Annual Will Eisner Comic Industry Awards, he was one of four professionals that year inducted into the Comic Book Hall of Fame.

Retrieved from "https://heykidscomics.fandom.com/wiki/Nick_Cardy?oldid=1505232"
Community content is available under CC-BY-SA unless otherwise noted.