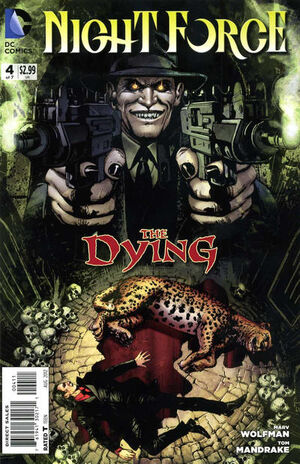 ... The same way we perfect cattle, vegetables, fruits, plants and God knows what else. But the thing of it is, the genetic manipulation techniques they were using in the 1700s... were only discovered in the last sixty years.

Appearing in "250 Minutes, Chapter 4: The Dying"Edit

Synopsis for "250 Minutes, Chapter 4: The Dying"Edit

Senator Brian Greene's wife inspects the room where the Nurses are nurturing the numerous Potentials, who are hoped to be perfect Generation-10s. Unfortunately, none have come close to it except for Brian Greene's offspring. He has fathered a perfect Generation-10 by Zoe Davis, who needs to remain alive for another 5 months, to complete the gestation. Mrs. Greene is sure that the wait will be worth it, given the value of a perfect Generation-10. The Gatherer who tried to kill Zoe has been disciplined, and her memory of it all was wiped, though her recent meetings with Baron Winters may prove problematic. Ironically, the Baron is the man who made all of this process possible. Mrs. Greene suggests that she may have her husband impregnate Zoe again, just in case lightning strikes twice.

Meanwhile, Baron Winters has transported a cancer-stricken Donovan Caine to Wintersgate Manor, hoping to get answers about the Harvesters and Gatherers. Reluctantly, Donovan tells the story of how his great grandfather Jeremiah had discovered the Harvesters and Gatherers. He was a slave owned by the Monroe family, and he had helped them carry firewood to some neighbours, the Fairchilde's. They had arrived to find a mysterious man kidnapping Mrs. Fairchilde, and Mr. Fairchilde's life had been drained from his body. The Monroes were so horrified that they made Jeremiah a free man.

It was years before Jeremiah heard the words again, and his research led him to find that Harvesters and Nurses can be traced back in conjunction to the Revolutionary War. Despite being untrained and barely armed, the American Rebels had beaten the most powerful military on earth. Supposedly, a deal had been made between the Founding Fathers and these Gatherers, but Jeremiah could never prove as much.

Jeremiah's research found that there are Dormants - people who have the dormant capacity to manifest an innate psychic ability. Gatherers find these Dormants, and the Harvesters then propagate them, using techniques to cull unwanted genes, and bring the psychic abilities into dominance until increasingly stronger Dormants could be bred. This is going on even still. After the Harvesters breed the Dormants, the Nurses watch over the incubating babies and make adjustments so that they are raising perfect specimens. What's strange about this, is that the whole process - even as it was used in the 1700s - uses technology and techniques that were only discovered in the last 60 years.

Baron Winters explains that he may know a Dormant, but before he can tell Donovan anymore, he catches a pointed glare from Merlin, warning him not to say anymore. All they can offer Donovan Caine is a peaceful, painless death, as respite from his cancer. Donovan's interest has been piqued by the mention of a Dormant, and he begs to be allowed to see her first. Merlin will not allow it, and the life soon leaves Donovan Caine's body. Staunchly, Baron Winters insists that he give his old acquaintance a proper burial, regardless of the Leopard's desires.

Meanwhile, Jim Duffy and Zoe rifle through Jim's father's files until he finds a photo of the woman he believes is Zoe's mother: Kimberly Halpern. Just like Zoe and her grandmother Carole Dutton, Kimberly Halpern was raped, and then disappeared shortly before giving birth. Zoe begs Jim to use his connections to help her find out who raped her, despite his intent to withdraw from this sort of life with his retirement in the next week. Reluctantly, he agrees to help. Soon after, they receive a call from Baron Winters, cryptically telling them to hold on to something.

They find themselves in the same place they were standing, but at a different time. This is Jim's father's office as it was back in 1956. On his father's desk, Jim reads that there was another woman who survived an attack named Madeline Greene. Her son Brian Greene has since become a senator. When they hear someone coming, Jim and Zoe hide in a closet. From their hiding spot, they see James Duffy, Sr. enter, followed by one of the menacing Gatherers. Jim realizes that this is the moment of his father's death. The gatherer attacks, as Jim hears his younger self banging on the door from the outside. Unable to contain himself, Jim rushes out of the closet to save his father, but Zoe grabs his arm and they run from the room before the Gatherers can turn on them. As he breaks into the room, the younger Jim sees them escaping. Peering in from the window outside, Zoe explains that they can't go back. He had told her that when he saw his father's death as a boy, he had seen two people escaping that he never saw again. That means they can't go back inside. From the window, Jim watches his father give his younger self the the mysterious coin. Jim's eyes connect with his dying father's in those last moments, as his father promises that he will always love him.

Meanwhile, Baron Winters travels to the year 1648 to see Kassandra Fey the Oracle. When he arrives, he discovers her dungeon empty, with a bloody message warning of the suffering she promised him. He is suddenly surprised by the appearance of the Gatherers, who gas the Baron and Merlin, leaving them unconscious on the ground. The Gatherers warn that there will be no one in this time period to save him now.

Retrieved from "https://heykidscomics.fandom.com/wiki/Night_Force_Vol_3_4?oldid=1444495"
Community content is available under CC-BY-SA unless otherwise noted.