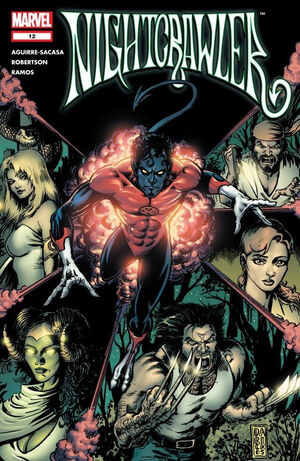 “Loose Ends” Part 1 (of 1) It’s been a harrowing year for everybody’s favorite furry blue elf, so Kurt’s due for some well-earned rest and relaxation. Unfortunately, his friends old and new have decided to throw him a surprise birthday party! And at least one uninvited guest will be showing up--but will he be bringing good or bad tidings in this offbeat tale? 32 PGS./T+ SUGGESTED FOR TEENS AND UP ...$2.99

Retrieved from "https://heykidscomics.fandom.com/wiki/Nightcrawler_Vol_3_12?oldid=1731509"
Community content is available under CC-BY-SA unless otherwise noted.