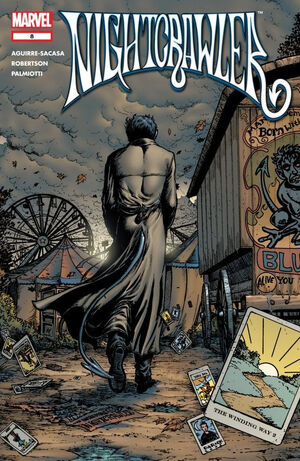 "THE WINDING WAY" Part Two: Dark Carnival Kurt's journey along the winding way begins in earnest as he, buddy Logan, and hottie nurse Christine Palmer travel to the eerie forests of Bavaria, where our favorite blue elf was raised by the gypsy enchantress, Margali Szardos. But what are the dark forces compelling Kurt to revisit his past? 32 PGS./T+ SUGGESTED FOR TEENS AND UP …$2.99

Retrieved from "https://heykidscomics.fandom.com/wiki/Nightcrawler_Vol_3_8?oldid=1646968"
Community content is available under CC-BY-SA unless otherwise noted.