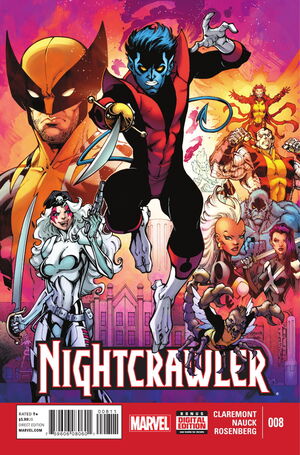 • Still reeling from the death of his longtime teammate and friend Wolverine, Nightcrawler tries to honor his friend’s legacy by carrying on business as a teacher and an X-Man…

• But Bloody Bess has other plans for our hero!

Due to either writer or artist error, the wrong Omega was used, Omega White was the one Psylocke used to trap the Shadow King in, not Omega Black back in Uncanny X-Force Vol 1 34.[1]

Retrieved from "https://heykidscomics.fandom.com/wiki/Nightcrawler_Vol_4_8?oldid=1647221"
Community content is available under CC-BY-SA unless otherwise noted.