Part of the 'Rise of the Midnight Sons' event 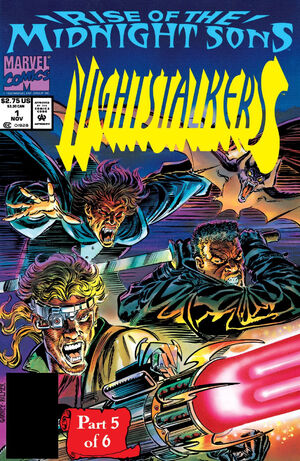 The shadows and the darkness, they've protected the occult for too long...

Appearing in "Rise of the Midnight Sons, Part 5"Edit

Synopsis for "Rise of the Midnight Sons, Part 5"Edit

The Lilin known as Nakota has escaped from her last encounter with the Spirits of Vengeance.[1] Now, the Ghost Rider and Johnny Blaze give chase, hoping to catch her before she returns to her mistress. They manage to stop her, and Ghost Rider incapacitates Nakota with his Penance Stare. Through the experience, Ghost Rider has a vision of three more men who may be of potential aid in the upcoming battle with Lilith – Blade, Frank Drake and Hannibal King.

In Boston, Frank Drake takes his wife, Marlene, to the New England Aquarium. While observing the whale tank, Frank has a harrowing vision of Lilith tearing through the belly of the creature, and emerging in the Earth realm. Frank shakes away the vision, only to discover that Marlene is now in a state of catatonia. Doctor Strange is present in the crowd and recognizes Lilith's influence.

Later, strange visits a mental hospital in Boston operated by Doctor Ritegrig. Under the capacity of a physician, Strange arranges to have Blade released from the hospital, despite the strong reservations held by Ritegrig. He surreptitiously uses his magic to provide Blade with his old equipment and weaponry.

Blade goes to Borderline Investigative Services to reunite with his old ally, Hannibal King. Hannibal has been having difficulty in life lately, as he now feels the old vampiric bloodlust welling up inside of him. Unlike most vampires, Hannibal has never consumed the blood of the innocent – a detail that once saved him from the effects of the vampire-destroying Montesi Formula.[2]

Meanwhile, Lilith and Pilgrim track down another one of her Lilin – Meatmarket. Meatmarket executes a man named Justin Hoyt and offers him up as a sacrifice to his "mother". He then shows her a parchment of dried flesh, etched with the likeness of the Mystic Nine that threaten to stop Lilith’s plans. The images include Blade, Frank Drake, Hannibal King, Ghost Rider, Johnny Blaze, Morbius, Victoria Montesi, Louise Hastings and Sam Buchanan. Lilith then embarks upon a plan to manipulate her enemies into fighting each other.

She takes on a human disguise and enters the offices of Borderline Investigations in the form of a paying client. Lilith tells the three men that she wishes to hire them to kill two "demons", Ghost Rider and Johnny Blaze. Blade is instantly set off by her, commenting that she gives off the scent of evil. The group outfits themselves with new equipment and weaponry, including a Necrotech gun that targets supernatural entities.

They hunt and eventually track down Ghost Rider and Blaze. Ghost Rider attempts to use his Penance Stare on Blade, but Blade deflects it with the reflective surface of his sword, causing Ghost Rider insurmountable pain. Drake then blasts Ghost Rider with his necrotech gun, "Linda", and causes Ghost Rider's bones to fuse together. Blaze draws his Hellfire gun and prepares to fire, but Blade counters the gun’s effects with a double-barreled weapon that fires miniature wooden stakes.

Suddenly, Meatmarket arrives and enters the fray. The combatants realize that they’ve been set up, and that they should be fighting Lilith's brood rather than each other. Hannibal King summons a plague of rats to distract Meatmarket, giving Blade the opportunity to decapitate him.

Across the river on the U.S.S. Constitution, Lilith and Doctor Strange watch the events from afar. Lilith baits Strange into entering the struggle directly, but Strange knows that his magic is too powerful, and would only serve to open the doorway between the two worlds even further. He knows that the fight can only be won by nine chosen champions of minimal power.

As the battle concludes, Blade, Frank and Hannibal form an uneasy truce with Ghost Rider and Johnny Blaze. Calling themselves the Nightstalkers, the three men vow that "the night is no longer safe" for the forces of evil.

Retrieved from "https://heykidscomics.fandom.com/wiki/Nightstalkers_Vol_1_1?oldid=1448734"
Community content is available under CC-BY-SA unless otherwise noted.