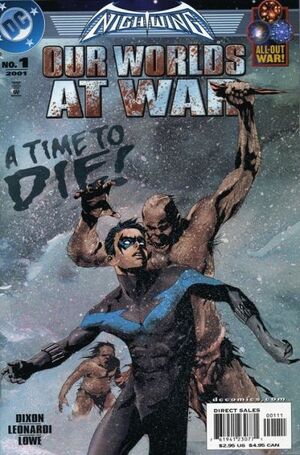 Earth is at war, and the people of Gotham are reduce to looting and rioting in their reaction to crisis. Into this comes Nightwing, searching for Oracle who said she needed him. He arrives at her clocktower apartment and is contacted by Oracle again, who tells him that she uncovered a strange computer virus at the same time that she got wind of the coming of Imperiex. Tracing this virus, she became convinced that the virus is from the future, and that it is what sent her the images of her death. They make their way to S.T.A.R. Labs, where they are met by Professor Orenstein - Oracle calls in a debt for help she gave him, telling him that unless he allows her access to Project Tomorrow, she'll die. Oracle and Nightwing enter the temporal field around the project and emerge in the early twentieth century - under gunfire from a hood hired to kill a lady in a wheelchair. Racing through various historical periods, the pair come under fire at every turn, whether in past or future - coincidence, or someone reaching into history to eliminate them?

Finally, in a relatively recent time period, they set up a ruse whereby they allow holographic projections of themselves to get shot, convincing their potential assassin that they're dead. They then wait it out until they can lock in on the signal from the present-day S.T.A.R. Labs. However, when they return, Orenstein is not expecting them. It transpires that they have arrived two days before they left, which explains why they were allowed access with few questions asked in the first place. Elsewhere, Oracle' survival is noted, but ignored. It is thought that the possibility of her tracing the virus' source has been greatly reduced and that other matters are far more important at the moment.

Retrieved from "https://heykidscomics.fandom.com/wiki/Nightwing:_Our_Worlds_at_War_Vol_1_1?oldid=1509675"
Community content is available under CC-BY-SA unless otherwise noted.