Traps and Trapezes is a Nightwing storyline published as part of The New 52. Following the timeline reboot during Flashpoint, it establishes his continuity in the DCnU. It's the debut arc of Kyle Higgins and Eddy Barrows on their [[Nightwing 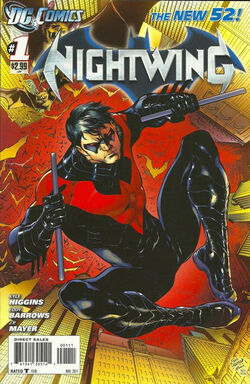 Traps and Trapezes is a Nightwing storyline published as part of The New 52. Following the timeline reboot during Flashpoint, it establishes his continuity in the DCnU. It's the debut arc of Kyle Higgins and Eddy Barrows on their Nightwing volume. Following Dick Grayson's ascension to becoming Batman during Battle for the Cowl, the story deals with him returning to his previous alias.

Dick Grayson returns to the position of Nightwing after spending the last year as Batman, feeling confident and recharged in his abilities. Haly's Circus now run by Bryan Haly returns to Gotham City for the first time since the Flying Graysons were murdered. Dick reunites with many of his old friends, including acrobat Raya Vestri. On the way home he is attacked by the assassin Saiko who claims he is the most dangerous killer in Gotham and doesn't know it yet.[1] Saiko escapes by putting innocent lives in danger as a diversion. Raya takes him to see the dying old man C.C. Haly, who reveals that he's aware of Dick's secret identity and gives him the deed to the circus. Saiko tortures Haly to obtain Nightwing's identity while Dick is sleeping with Raya. He finds Haly just in time for the old man to die in his arms, after telling him the circus holds a terrible secret.[2] Dick attends Haly's funeral. He tracks down an old friend from the circus now involved with contract killers as a lead, but Feedback can't tell him anything. Returning to Raya, he tells her he's going to stay as long as he needs to to make things work. It's revealed that Bryan Haly is involved with Saiko.[3] Batgirl visits and they team up to take down a shape-shifter named Spinebender. Discovering Haly's secret hiding place, Grayson finds a book full of names that has his on the last page.[4] The circus' clown Jimmy Clark is attacked by a ex-lover who practices the dark arts, and Nightwing has to fight the demon Acheron to save him. Raya is revealed to be in league with Saiko and they share a sexual relationship.[5] Tracking down potential names, he gets another bad lead from Terrence Clark after fighting his bodyguard Shox. Raya tells Dick that they're doing a surprise memorial show for the anniversary of his parents' death. Despite his attempts to protect the ceremony, Saiko attacks and reveals himself to be an old friend of Grayson's from the circus. Saiko detonates an explosive in the crowded circus.[6] In their final battle, Nightwing manages to put out the fire and save the crowd but Saiko plummets to his death. Before dying, he reveals that Raya was in on their plan and explains the terrible secrets of Haly's Circus. They have been supplying the Court of Owls with young athletes to train as Talons for years, and Grayson had been selected until he was adopted by Batman. Saiko had been chosen in his place, and became obsessed with revenge after he failed the training and it destroyed him. Raya confesses for her crimes as an accomplice and is arrested. Returning to the Batcave, Nightwing talks to Batman about the Court and it's revealed that the current Talon is his great-grandfather. They prepare for war. Alfred Pennyworth gives Dick police files on a double murder committed using his escrima sticks, and he rides out to deal with the next challenge.[7]

Retrieved from "https://heykidscomics.fandom.com/wiki/Nightwing:_Traps_and_Trapezes?oldid=1549023"
Community content is available under CC-BY-SA unless otherwise noted.