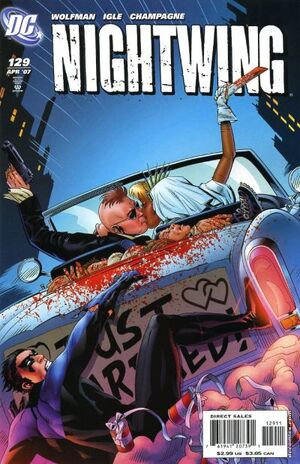 Appearing in "Bride and Groom, Part One: The Courtship"Edit

Synopsis for "Bride and Groom, Part One: The Courtship"Edit

1960, Salem, Massachusetts - Thomas Larson attempts to give Elizabeth a posey ring but instead she belittles him telling him that the girls think he's daft and scary. All the while Thomas sees her aura take form to a solid red. Shortly after he dismembers her, crying and begging forgiveness.

Retrieved from "https://heykidscomics.fandom.com/wiki/Nightwing_Vol_2_129?oldid=1444635"
Community content is available under CC-BY-SA unless otherwise noted.