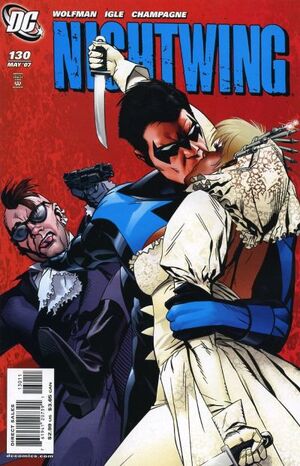 Appearing in "Bride and Groom, Part Two: The Proposal"Edit

Synopsis for "Bride and Groom, Part Two: The Proposal"Edit

1790 - Violet Parris is interrupted during an energy feeding of a girl named Margaret by an armed posse. She is accused of also murdering four men in Worcester and they prepare to hang her. Among the posse is Thomas Larson who, upon seeing her aura as red, intervenes presumably killing one and "convincing" others not to follow. Thomas promises Violet that they'll soon become friends.

Retrieved from "https://heykidscomics.fandom.com/wiki/Nightwing_Vol_2_130?oldid=1444636"
Community content is available under CC-BY-SA unless otherwise noted.